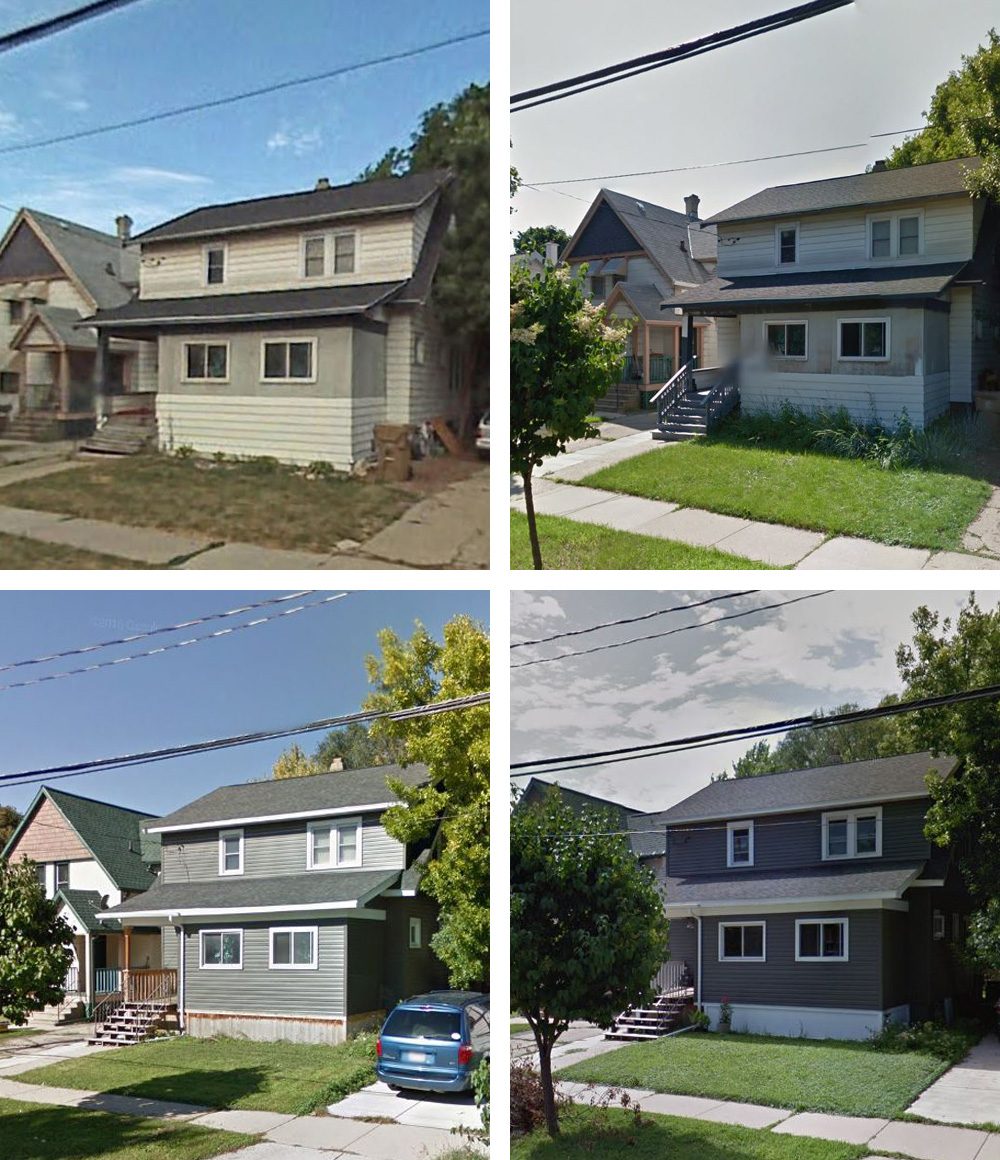 As I was looking at Google Maps a few weeks ago, I noticed that the street view now included our house after we purchased it. It prompted a quick scroll through the archives to see what the property looked like over the past ten years. We still have work to do in terms of curb appeal, but I’m feeling a lot better about where things are at after seeing these images. The top two images were obviously taken before the siding was replaced. I’m surprised that the siding didn’t continue all the way down the front of the house. Instead, the owner opted for some pretty shoddy boards and left the woodwork bare. The bottom right photo was taken a month after we took ownership of the house. One of the first things we did was paint the wood on the bottom, the porch column, and the porch railing. We’re still trying to figure out how we want to treat the stairs and landing of the porch. I want to paint it white, but Dave would rather do stain. (Dave’s biggest concern with paint is that white might end up looking dirty and it requires upkeep. I don’t like the idea of stain because I think the wood color makes the house look unfinished.) We also need a different railing. The metal one doesn’t fit with the aesthetic of the house. I almost prefer the stairs in the top right image. The weightiness of the wood stairs and railing fit the size of the house better. 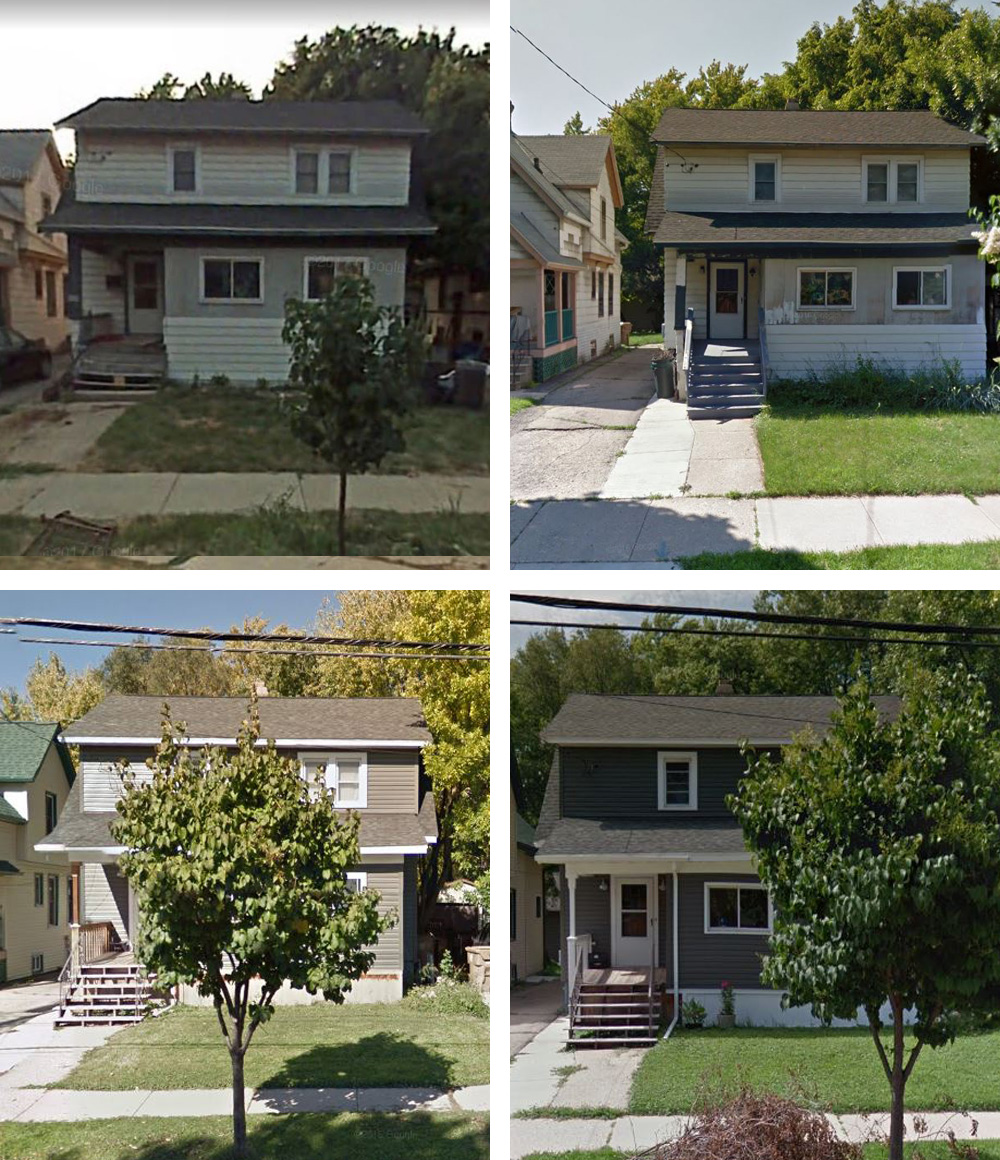 The front of the house gives you a better view of the landing that we’re working with. Behind the stairs is more of that bare wood. We weren’t able to paint it last summer because of the overgrown weeds and aggressive mosquitoes that were underneath. I’d like to tackle that this spring before the weather really warms up. In addition to paint, we’re going to lay down landscape fabric under the stairs and cover it with decorative rocks or gravel. The staircase annoys me with the open risers. We’ve looked at adding fronts, but the depth of the board would need to be so so thin that I’m afraid someone would easily kick through it. Poured concrete stairs would be great, but those are ungodly expensive and we’d rather put the money elsewhere right now. Either way, they’re better than the stairs in the top left photo!

As far as curb appeal goes, we’d like to add some hedges to the front. Some people have suggested organically shaped bushes, but after seeing them in the upper right photo, I think our house needs something more traditional and tailored. On the porch, you can still see the old, rusting mailbox sitting on the floor that the previous owner never mounted on the house. We’ve since purchased this mailbox and added these house numbers. We’re going to purchase a new storm door this spring (likely this one with the retractable screen) and add some potted plants to flank each side of the door. I love these concrete planters. 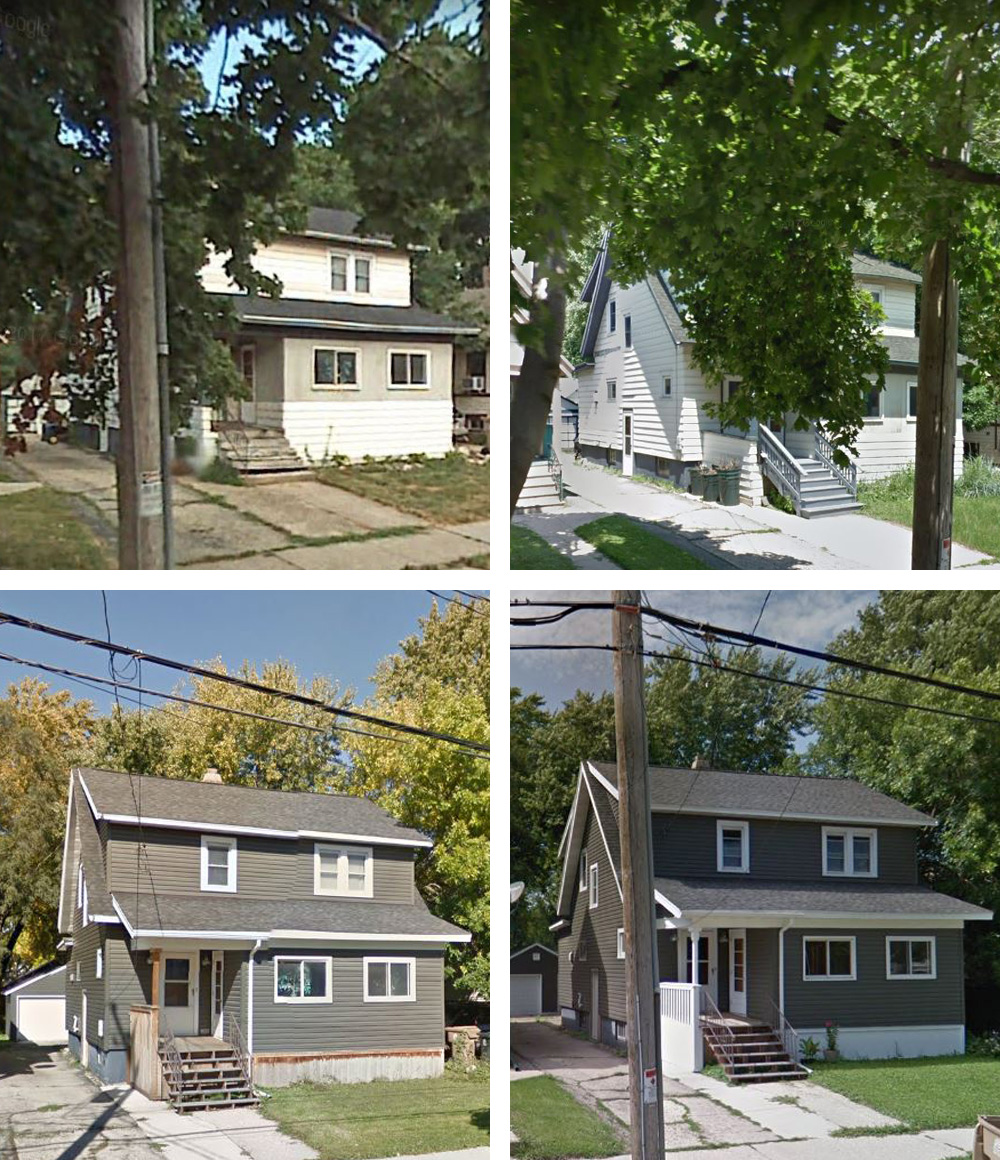 From this angle, you can see the painted concrete on the side of the side of the house. I erroneously assumed the previous owner was trying to match the color of the siding and did a poor job with his paint choice, but now I see that it was blue for awhile. Not surprisingly, I want to paint it white this year. The blue drives me nuts because it clashes so much with the colors of the house. However, I’m wondering if I should paint it a charcoal grey and then do our stairs and landing in the same color? I’ll be Photoshopping some options before spring so I can visualize it! One of our long-term goals is close off that second door on the landing (to the right; it goes to the original porch) and add more windows to the front of the house so they wrap around. We’ll have a contractor come out this spring to give us a quote so we can start saving up for that project.