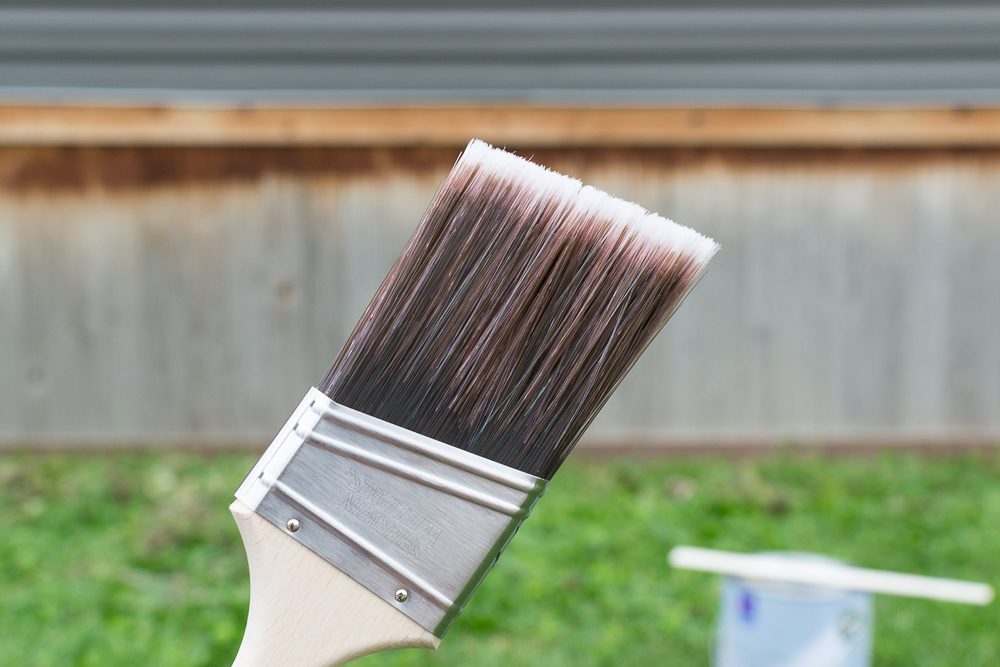 We’ve had our house for just one week and have already made substantial progress. After receiving the keys to the place last Tuesday and accomplishing a few things that were at the top of our to-do list, we started working on the outside of the house to give it a little bit of curb appeal. While the inside of the house probably should have been our priority (time’s a-ticking until the floors are redone the week of July 10), it was important for us to make the house look welcoming when we swing by each evening to work. Unexpectedly, it also helped us make a great first impression with the neighbors! The people on either side of us remarked on how much better the house is looking already and that they’re thankful that someone is finally caring for the property. (Plus, a big shout out to our neighbor who had been mowing the lawn when the house was basically abandoned! The yard was shin-high with weeds when we had our home inspection and we were expecting to have to deal with that jungle on day one, so you can imagine our surprise when we saw that it was taken care of.)

Let’s move on to photos of our progress, shall we? 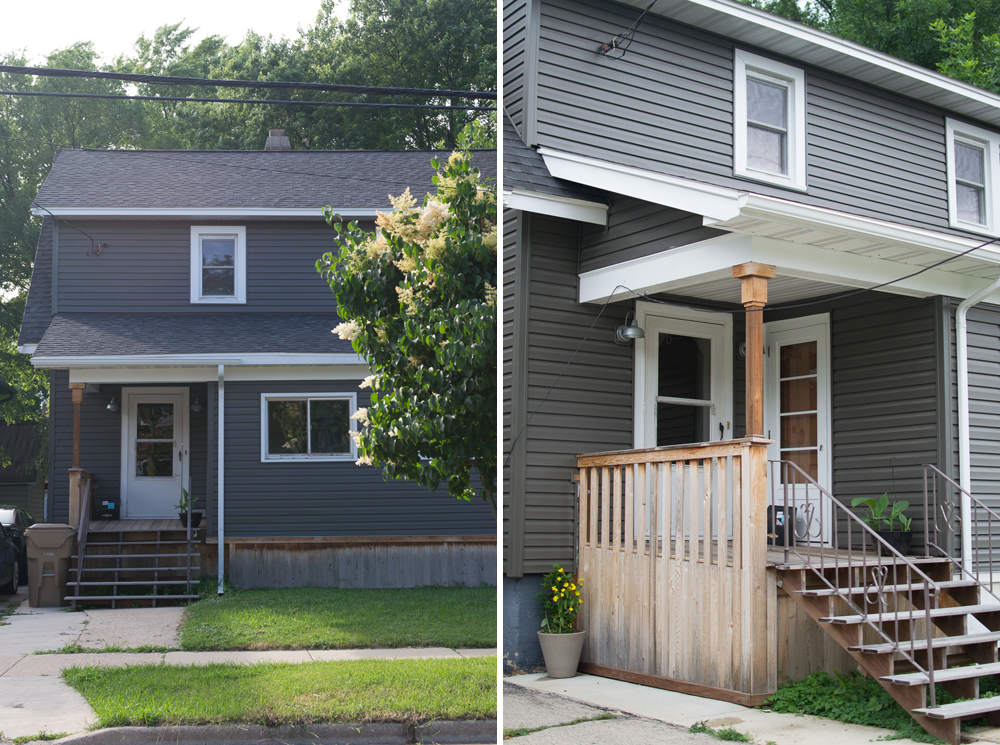 New siding was put on the house in 2015 and for whatever reason the owner half-assed the job and didn’t finish giving it a face lift (which, as you’ll learn, is par for the course in this house). The bottom portion of the house was treated lumber that was stained from being exposed to the elements for entirely too long. Even if it wasn’t stained, it looks awful. We spent the better part of the week sanding as much of the rough wood as we could. (The owner used lumber that was never meant to be on a deck or side of a house. It’s not the prettiest, but we’re making do with what we’ve got.) On the front of the house, we used two coats of primer and two coats of paint to cover the stain. On the railing and column, we went with one coat of each and then touched up the paint in just a few spots. You can see what a huge difference that made in the photo below when just the primer was put on. (I couldn’t reach the top of the column without Dave’s help later!) 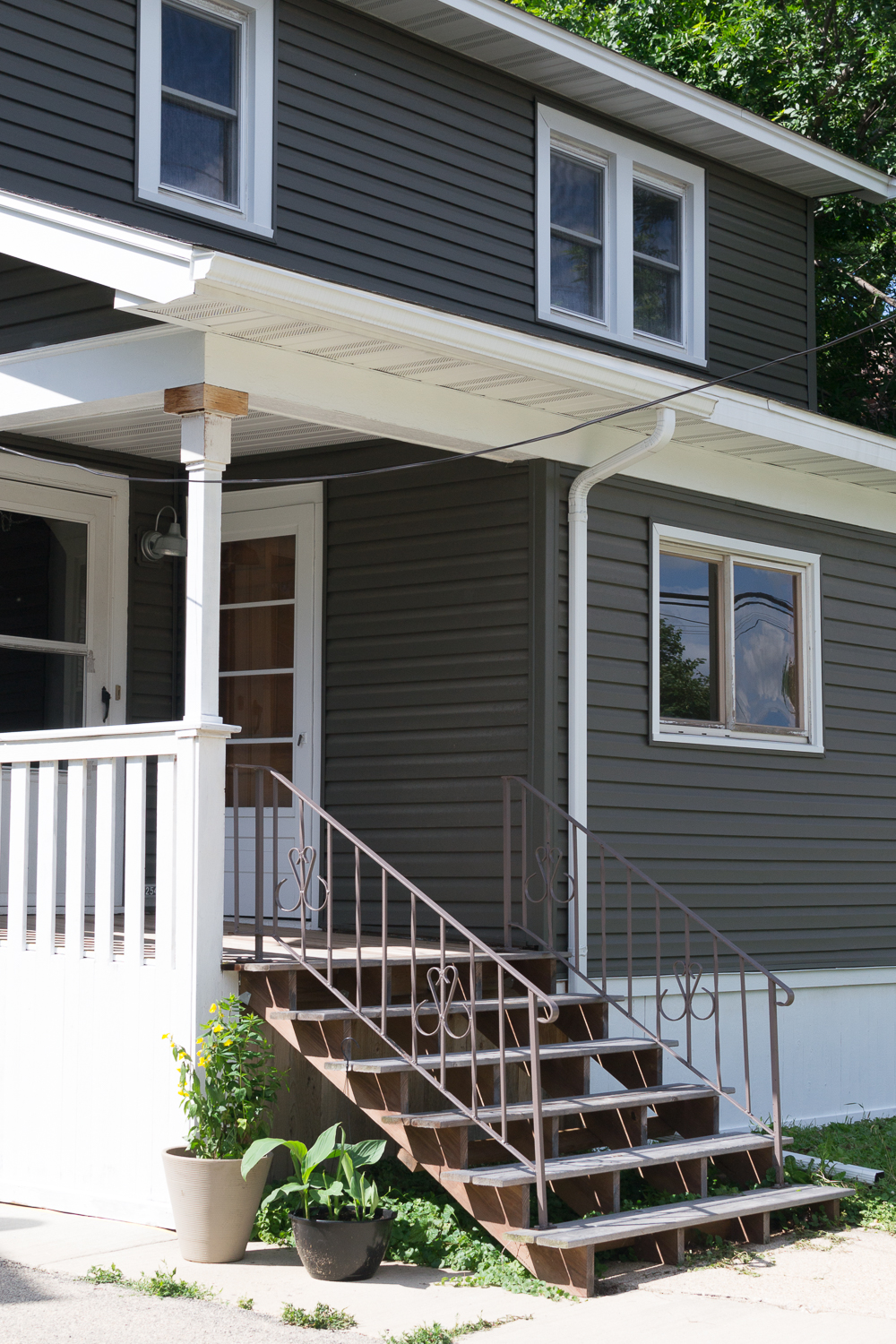 We’re putting a pin in the rest of the porch for now. We need to get inside and paint before the floors are finished. But we’d like to add wood to the risers instead of having open stairs, paint or stain the porch, spray paint the railings black, add gravel under the stairs to prevent weeds, add house numbers, mount a mailbox, plant hedges, and address the window that you can see in the photo above.

The very first thing I did in the house — post celebratory beer, of course — was remove the carpet from the entryway coat closet. I don’t know who thought it was a great idea to leave carpet in there, especially since it probably took more time with an X-Acto knife to cut it in line with the door than the two minutes it took me to rip it out. I spent another 15 minutes or so removing the finishing nails that remained in the floor.

Here’s our office. While I’d love nothing more than to rip the wood paneling off the walls and start fresh with something updated, that’s not going to happen. We have plaster walls and pulling down the paneling is just asking for a bigger repair job than we have money to fix right now. So, the wood paneling stays. Besides, “vertical shiplap” is evidently an emerging trend. We’re on the cutting edge, guys! We spent hours on Saturday night removing nails and screws and filling the holes with wood putty. The next morning, we gave the wood putty and the walls a light sanding before putting on a coat of primer. I’m really pleased with how it’s turning out so far, and white is such a breath of fresh air! I’m planning to paint the trim and ceiling, but we need to sand the window sills first. There are 90 years of scratches, dents, and divots that were filled with layers and layers of paint. It’s never going to be totally smooth, but anything we do will help. (Our master bedroom has the same wood paneling. We’re using the office as our trial run to see what we should change in the process before doing the second room. I’ll post a tutorial once we have it figured out!)

Wow, right? 😉 It sounds like this house was converted into two apartments at some point in its life. This was likely a kitchen (the gas line for a stove is capped off in my walk-in closet across the hall). The first two photos were taken during our inspection, and the third photo was taken the first day in the house. It didn’t take long for Dave and his dad to take down the cabinets and move them to the garage where we’ll likely mount them for storage later. In the center photo, the door on the right was just on L-brackets and nailed into the door frame connecting our master bedroom to the guest room. We took it out and we’ll look at installing a vintage door to match the vibe of the house. While we’d love to just drywall over it, our bedroom has wood paneling like the office and the air duct for the room is on the floor under the door. So, it’s a bigger project for down the road. 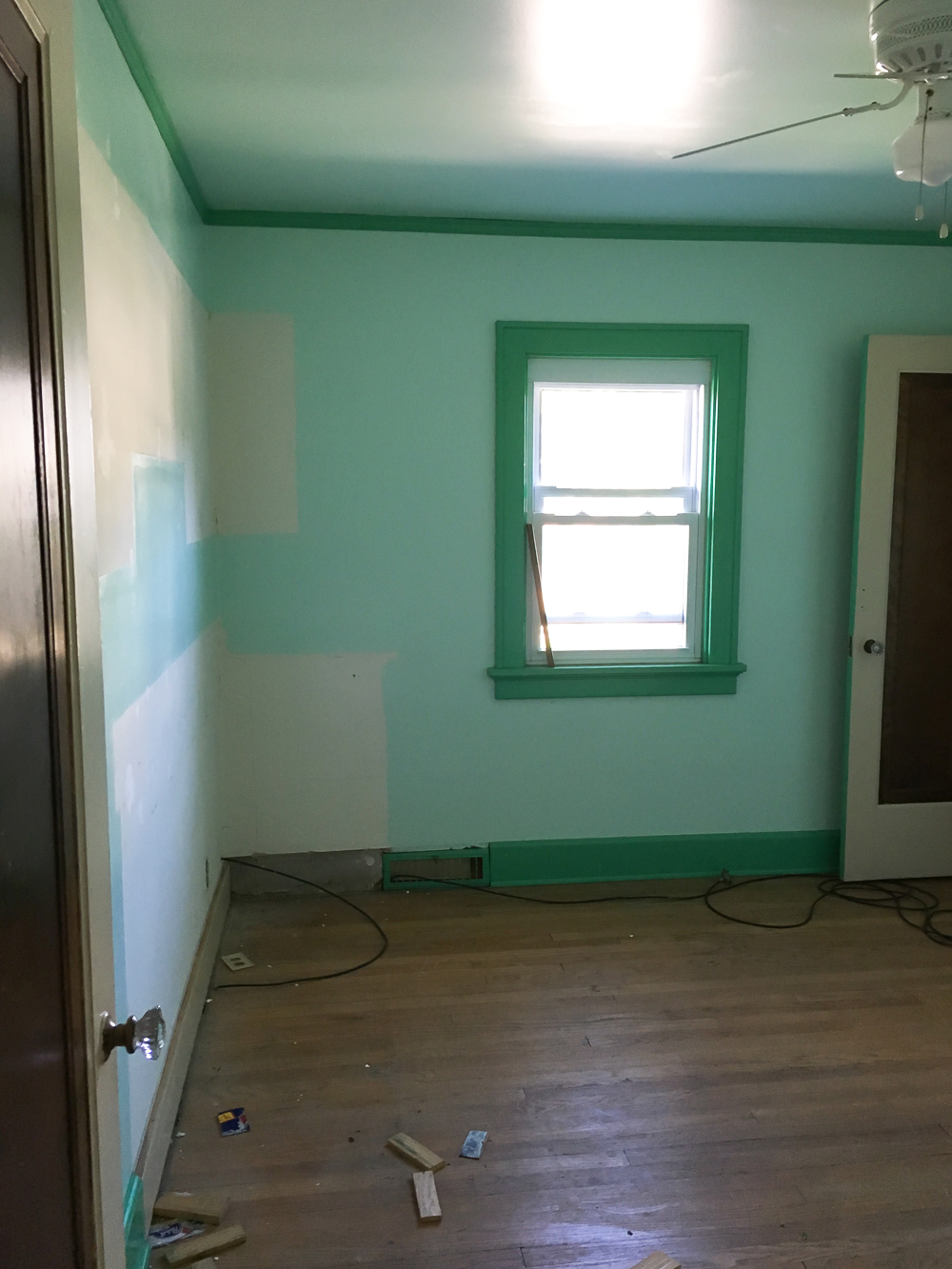 We obviously have priming and painting to do. We also need to repair the trim that was cut when the cabinets were installed. My coworker told me about a store in Madison called Deconstruction that has things like vintage hardware, doors, and trim. We’ll see if they have anything that matches, but there’s a chance we’ll need rebuild the small details with quarter-round trim from the hardware store. We’re going to paint the trim in here, so it’s not a big deal if the wood isn’t a perfect match.

So, that’s where things are at! We have a long road ahead, but we’ll get there! My parents are coming to Madison this weekend to help us get the painting done before the floors are refinished. I’m opting for white in a lot of rooms, which is terribly boring and not something I want for the long term. We just need to live with the house a bit at first and see what colors we’d like to move forward with. If anything, it’s much easier to paint a color over white paint than it is to paint white over a color!